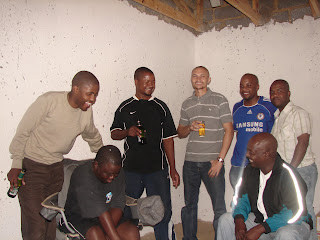 Friday:
Went to the local pub after work, had a couple of drink with friends, discussed politics, The Selebi Saga featured prominently on the agenda, and bets were placed on how long he will stay in jail. I’ve got my money on at least two years, that’s if he gets locked up in the first place. This prominent people has a tendency to avoid jail sentences better than the average Joe. Soccer, and girls also featured on the discussions. What’s would a discussion be amongst boys be without mentioning (complaining) out better halves? Or mentioning the new stunning girl who just joined the company...The Brett Kebble murder also got mentioned. What man decide he wants to be assisted in his own murder, scary stuff indeed. Someone even mentioned the ridiculous idea by the ANC's proposal for a statutory media tribunal and the much-contested Protection of Information Bill, I call that a disservice to society. Before I knew it, the times is gone. It’s 02:00 AM, and I have to go home to face the fury of a disgruntled girlfriend.
Saturday:
Made peace with girlfriend, promised to come back home earlier the next time I went out with the guys. I’ve spend a couple of hours with her (Sadly missing the first couple of matches of the day) and took her shopping. There was peace in the Lekhuwana household again. Even thought I knew It was temporary. My thirst for my famous Heineken (http://www.news24.com/MyNews24/YourStory/Getting-rid-of-a-bad-image-20100702) would soon drive me out of the house, and that was common knowledge. She knew it, and I knew it. It was just a matter of time, and I would succumb to the irresistible lure of my favorite beverage.
The thirst finally got to me, I had to go get that drink, and I had to see the final match between Kaizer Chiefs, and Pirates with the guys. I wouldn’t miss that match for anything in the world. Even the thought of the imminent draught that would follow in the bedroom, after committing two fouls wouldn’t make me stay put. My team won, that called for a celebration. We got together with guys to discuss the game, and to toast to the Gods for being on the side of winning team. Next thing it’s 02h00 am. Shit.... Girlfriend will be ecstatic. I rushed home, and tip toed into the house. I tried to sneak in quietly next to her without waking her up. It didn’t work. She raised one eye brow, and looked at the wall watch. I was doomed. I pretended to be in deep asleep.

Sunday:
Stayed in bed late, hoping the storm would be over by the time I woke up. It was not to be. What could I say I say… Sorry? Would it work, again?
Neglected a commitment I made to a friend about finally going to church this weekend, but making peace seems to be right thing to do now, then to go to church.
Took her to the movies, got her chocolate on the way home hoping it would clinch the deal. No bribes could works this time around. Guess it’s a chain reaction.
Eish….why can’t she just let me go wild for one weekend…... Why, why why....... the answer is simple.... women knows best, the path we normally choose leads to destruction, and they love us too much to let us continue with that path.

Monday: Women’s day, Spend the day indoors, making peace. Trying to make the woman in my life feel valued. I wish I could cook, maybe that would soften her... Guess we can always go buy takeaways, or eat somewhere as a compromise
Happy woman’s day to all you wonderful ladies out there. Thanks for your understanding, comfort and love. It’s not easy living with the male species I know, and we appreciate you, and your tolerance.
I would like to thank the mother of my son, Dumisile Magagule, for sticking with me. I’ll try to be a better man, and father.
Where would I be without you?
Posted by Unknown at 04:24